The TBH Toolkit classes are based on our TBH Blueprint, simple, specific steps to engagement across three pillars of wellbeing: 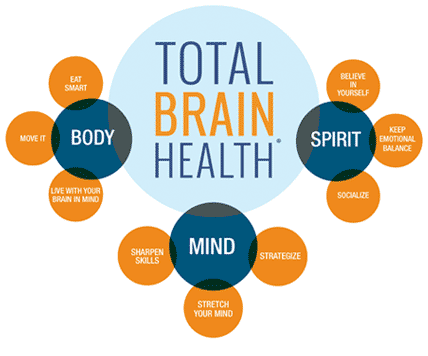 CONCLUSION:
“Lifestyle risk factors for CVD, such as obesity, lack of exercise, smoking, and certain psychosocial factors, have been associated with an increased risk of cognitive decline and dementia.”

Vascular Contributions To Cognitive Impairment And Dementia: A Statement For Healthcare Professionals From The American Heart Association/American Stroke Association
Stroke 2011

CONCLUSION:
“…detection and control of the traditional risk factors for stroke and cardiovascular disease may be effective in the prevention of VCI (vascular cognitive impairment), even in older people.”

CONCLUSION:
“In an older population, a Mediterranean diet supplemented with olive oil or nuts is associated with improved cognitive function.”

CONCLUSION:
“Human data show that executive functions of the type associated with frontal lobe and hippocampal regions of the brain may be selectively maintained or enhanced in humans with higher levels of fitness.”

CONCLUSION:
“In conclusion, we provided first evidence for a dance intervention resulting in increased FA. We attribute this to the fact that dance is a combined cognitive, physical and social training, known to boost intervention outcomes.”

The Impact Of Cognitive Training And Mental Stimulation On Cognitive And Everyday Functioning Of Healthy Older Adults: A Systematic Review And Meta-Analysis
Ageing Res Rev 2014

CONCLUSION:
“Mindfulness training improved both GRE reading-comprehension scores and working memory capacity while simultaneously reducing the occurrence of distracting thoughts during completion of the GRE and the measure of working memory.”

CONCLUSION:
“An 8-week, 12 minute a day meditation program in patients with memory loss was associated with positive changes in mood, anxiety, and other neuropsychologic parameters, and these changes correlated with changes in Cerebral Blood Flow.”